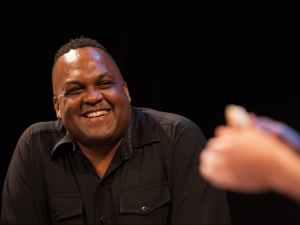 Writing for the Actor

K. Lorrel Manning is an award-winning writer/director, actor and musician who works in both film and theatre. His first feature film Happy New Year, based on his critically-acclaimed play and award-winning short film of the same name, had its world premiere at the 2011 SXSW Film Festival and has screened at over two dozen film festivals. The film won multiple awards in the U.S. and abroad, and was officially released by Snag Films in 2013.

Most recently, Manning wrote and directed three short films for Guggenheim Studios: The Great Love Rosemary, Pure and My Father’s Heart. He is currently prepping his second feature, Sheila & The Punk Rock, a television series, and is currently shooting a feature-length documentary on young painter Ludovic Nkoth.

As a theatre director and playwright, Manning has worked extensively Off-Broadway and Off-Off Broadway as a playwright, director and actor. Most recently, his critically-acclaimed play AWAKE, which he also directed and starred, received its world premiere at the Barrow Group in January 2019.

Manning has an MFA in Film from Columbia University and a BFA in Drama from the University of Georgia. He currently teaches advanced screenwriting and acting at Sarah Lawrence College.